Another successful archive visit; this time to SwissJazzOrama located in Uster, a short train journey from central Zurich, Switzerland. 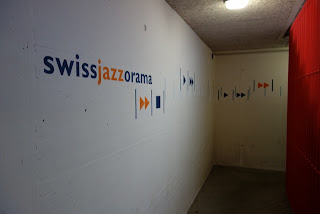 This is a delightful place. Housed in what was once an electricity building, the ground floor has a small exhibition space (currently showing is an exhibition on 'Jazz Ladies') and a sizeable concert hall where the jazz club meets. The next floor is taken up by a second hand music store where all the multiple copies of material are sold (mainly vinyl but also books, CDs and DVDs), with sales helping to fund the archive. There are also workstations for volunteers in this space. 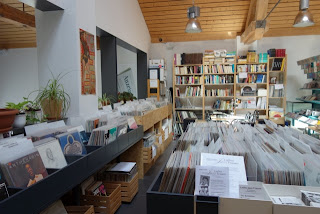 The top floor is shared with the local music school and in addition to practice rooms includes a meeting space which is where my interview with three of the volunteers took place; over coffee around a large oval table.
It is always a pleasure interviewing DIY archivists and the couple of hours spent with Fernand Schlumpf, Peter Niederer and Tony Bellwald was no exception. Fernand, the vice president of SwissJazzorama, talked me through the founding story of the archive which was originally located elsewhere in Switzerland but thanks to support from the city of Uster was later moved to the current building.
The archive itself is in the basement of the building next door. I was given a tour of the archive and saw the progress being made on the current project which sees volunteers labelling all items in the archive that are of Swiss origin (it is an international collection) - the red stickers on spines make Swiss material easy to spot. 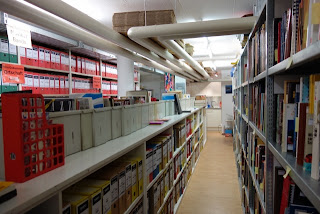 A volunteer was hard at work in the basement cataloguing print materials. He is one of 30 volunteers at what is a purely volunteer run organization - there are no paid positions here. Like is the case at the Victorian Jazz Archive, the majority of volunteers are over 60 years old and retired. Fernand, Peter and Tony talked of the difficulties in recruiting younger volunteers and the need to reach out to schools and universities.
The volunteers of SwissJazzOrama are interested in connecting with other DIY archives, particularly about the possibilities of establishing a vinyl exchange. And because this is an international collection they are also interested in receiving material from outside Switzerland. As part of my research I hope to help foster relationships between DIY archives and will be putting Fernand and colleagues in touch with other archivists participating in this research. In the meantime, if you have material to donate to SwissJazzOrama please contact the volunteers here.
Posted by Sarah Baker at 7:30 pm