Capturing a moment in time: a visit to the South Australian Jazz Archive

Earlier this week I made a visit to the South Australian Jazz Archive in Adelaide, South Australia. This archive is a little younger than the Victorian Jazz Archive (the largest of Australia's DIY jazz archives), having been founded in 2003/4. Run entirely by volunteers, the archive seeks to preserve, collect, catalogue and display material that pertains to ‘the origin and development of the various styles of jazz, swing, and “hot” dance music in South Australia to the present day’, including material relating to ‘relevant performances and recordings by South Australian musicians in South Australia and elsewhere in the world’. The archive’s catchphrase is “Saving and celebrating our jazz heritage”.


Located in the Adelaide CBD in the administration building of Scots Church, the SA Jazz Archive is open every Tuesday from 10am-3pm. The only evidence that this building houses the archive is an A-frame sign that is erected on North Terrace during opening hours. 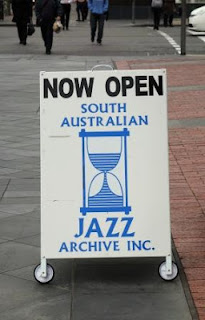 The archive rents an office in the Scots Church administration building and the office is just big enough to comfortably fit five volunteer work stations as well as the book and periodical collections. There is also a fine array of instruments on display. 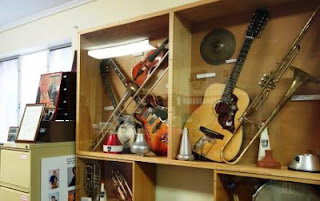 Other materials are located off-site in a ‘self-storage’ facility. As Eileen Spain, the volunteer in charge of periodicals told me, space is at a premium and running out fast.


Eileen is one of four core volunteers who regularly gift their time to the archive. Jane Shoebridge, the librarian and current secretary, is another regular, along with John Watts who is responsible for sound recordings. The other central figure is Archivist and current President Don Hopgood who I hope to interview when I visit the archive again later in the year.
I did, however, have an opportunity to speak with Ron Spain, the inaugural president of the archive, who filled me in on the SAJA’s founding story. Ron explained how the title of his book, ‘Moments in Time’ (a collection of interviews with jazz musicians), “describes exactly what the archive is trying to do”. He said, “all we can ever do as an archive is capture a moment in time of the musicians of any particular age group, any particular era”, whether that be as a recording or an artefact like a poster. Though this isn’t the archive’s official “catchphrase”, Ron believes that in terms of what the archive is about and how it operates “that’s exactly what we are doing, just trying to capture a moment in time of as many people in South Australia as we can”. 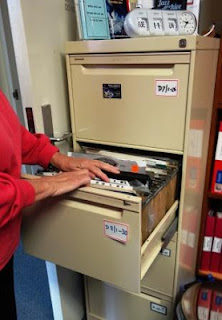 It is always such a delight meeting the volunteers who dedicate so much time and energy to the preservation of music heritage, and Eileen, Jane, John and Ron were no exception. I was warmly greeted with a cup of tea and a biscuit, this being a morning routine at the archive, before getting stuck into the interviews.
This is a much smaller operation than the Victorian Jazz Archive  but no less important. In addition to the SAJA's emphasis on collecting material --- and the archive willingly receives donations --- the archive holds tribute concerts and releases CDs, including recordings of the SAJA concerts, with an emphasis on supporting young musicians in these ventures (the Conservatorium is across the road from the archive and the head of the jazz studies program there is on the archive’s committee) while at the same time honouring established South Australian musicians. A video presentation of the CD releases can be found on YouTube and an example of the tribute concerts can be found here. 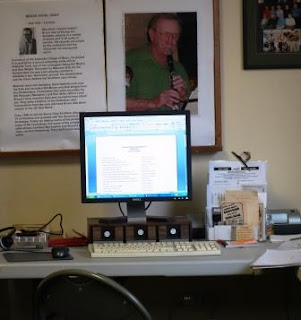 The archive has also started a lending library, and so now welcomes the donation of duplicate copies of jazz-related books. Jane has also initiated a book club which draws on the library’s holdings and which has a growing membership of enthusiasts, both SAJA volunteers and members of the Southern Jazz Club. Jane noted that while the ‘social function’ (part of the typology of DIY institutions put forward by me and Alison Huber in our forthcoming article in the European Journal of Cultural Studies) is very prominent in the jazz club, the archive is an “intellectual exercise” for many of the volunteers providing an outlet for the use and display of jazz ‘capital’. The book club, for example, is described by Jane as being more “adventurous” than what might otherwise have been a simply “socially sustaining” gathering because the people involved are “extraordinarily knowledgeable”. It is still “convivial” but the book club has come to operate more like a seminar because individual members will lecture on topics on which they are experts and other members listen because “they want to hear what [the speaker] has to say”. The lending library and book club are excellent initiatives which ensure the archive’s materials are used, the knowledge of members is shared, and jazz heritage is celebrated.
Moves are afoot to try and find a more visible location for the archive where its merchandise can be sold; archival materials displayed and, as Ron described it, where the SAJA might “hit a wider audience”. Increased visibility will hopefully lead to more corporate sponsorship, with funding being a key issue for the archive. As with other DIY archives, there is always the need for more money to pay the rent and undertake projects. The SAJA depends primarily on membership dues and merchandise sales to stay afloat.
For more information about the South Australian Jazz Archive, a video presentation that provides an overview can be found on YouTube. I'm looking forward to returning to the archive later in the year to conduct more interviews and hopefully to also attend one of the SAJA concerts or CD launches as well as the book club.
Posted by Sarah Baker at 12:34 pm