Radios galore and more at the Sound Preservation Association of Tasmania

This week I found myself in Hobart where I made a visit to the Sound Preservation Association of Tasmania on that city's eastern shore.


Located in a heritage post office building in the suburb of Bellerive, a building it shares with the genealogical society, the Sound Preservation Association of Tasmania (aka SPAT) is an incorporated body that "aims to identify, collect and preserve recorded sound, equipment, literature, memorabilia and oral histories of especially Tasmanian origin". While there I spoke informally with a couple of the volunteers, who were huddled around a small heater, clutching mugs of steaming tea and tackling a new state of the art cataloging system, before interviewing current president, Lindsay McCarthy. 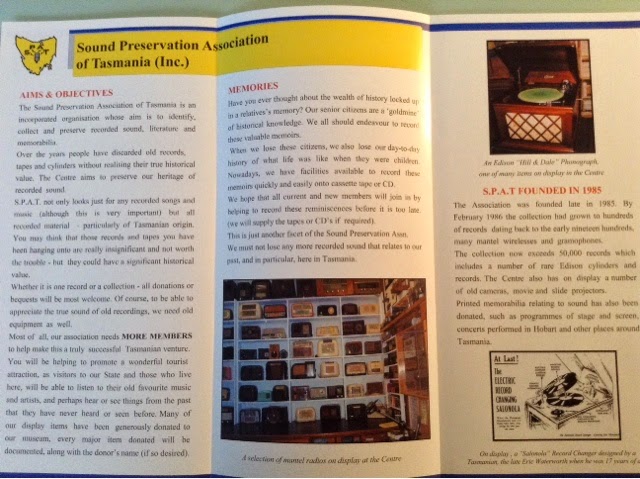 Lindsay was one of the original founders of SPAT which began its life in 1985. It had its beginnings in another of the founder's ideas to start a "record club". The bringing together of individual collections has now resulted in SPAT's collection of over 60,000 records. Hardly any of these can be found in the museum as due to lack of space in the post office these need to be stored off site in a shipping container (a similar story to the situation at the South Australian Jazz Archive). But what visitors to the museum will find is an impressive collection of graphophones and gramophones, wireless sets, and the full spectrum of music recording and listening devices up to the present time. 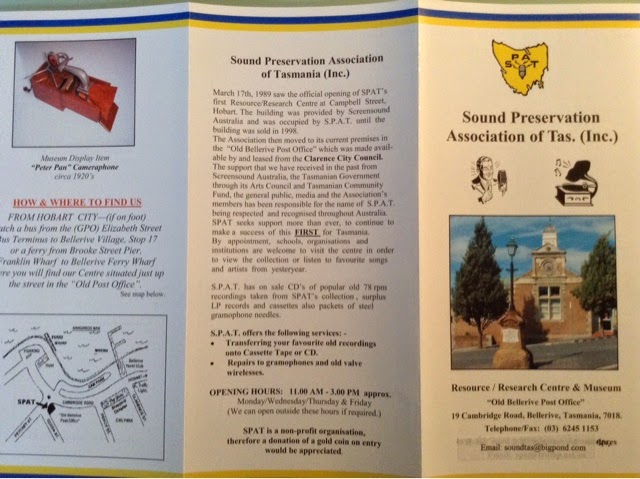 Many items in the collection are in working order thanks to Lindsay's technical background - he is a dab hand at fixing valve radios, as this video filmed at SPAT explains.

As with other DIY institutions of my research, SPAT needs more volunteers, more money and more space. The ABC ran a story about volunteer numbers a few years back but the plea for new volunteers still stands.
Posted by Sarah Baker at 7:00 pm